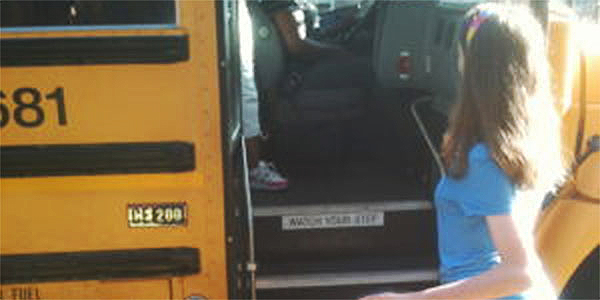 03 Jun Was Meredith left out?

Posted at 16:53h in Statesman Columns by Sarah Barnes 0 Comments

Meredith doesn’t just board the school bus, she brings the noise, taking each of the steps with heavy feet and a beautiful rhythm. Her enthusiasm says as much about her perseverance in this life as her love of public transportation.

I was gleeful last fall watching Meredith’s special education bus pull away from our curb on the first day of school, but watching the last puff of bus exhaust at the end of our street was when my giddiness turned to anxiety.

There is less need for parents to volunteer in the classroom in high school, so I knew I’d be hearing about her progress at McCallum High School largely through teacher notes and emails. For a child who didn’t walk till age 5 and is still working on writing her name at age 15, these are not just notes on her progress; they are vital hints to her future.

So thank god for “Miss Kim,” as Meredith calls her teacher, Kimberly Hanna, who has written me a virtual book of emails and backpack notes over the school year. There have been trips to Sam’s Club to learn about store organization and money, science experiments and story writing in language arts. It’s gifted teachers and aides who can teach a science lesson to students ranging in age from 14 to 22.

Hanna has hundreds of goals she has to keep current on each student and she certainly hasn’t lowered any expectations for Meredith. Our transition from middle school to high school has been virtually seamless, except I’m still getting used to the vocational field trips. When Meredith was in elementary school, my ever-hopeful heart just knew she wouldn’t be one of the kids going to Walmart, but watching her sort out the difference between a quarter and a dime this year is a poignant lesson that my dream must shift.

Though Meredith’s program, called Life Skills, does take place in usually one classroom all day, Meredith has an elective called theater arts with the regular education population, and this is huge progress for academic inclusion. She might not interact much with the students during class time, but just absorbing the material and seeing appropriate behavior is showing Meredith something about typical peers I can’t teach her.

One case in point was giving Meredith the job to hand out programs at one of the school musicals. This did not feel forced or patronizing, as I feared. It was just the best job for Meredith at this particular production. Many of the Fine Arts Academy students stopped to meet her, talking to her like a contemporary, not a 6-year-old.

You can wish for it, but you can’t buy this kind of inclusion. Sometimes it just floats into your life and hangs there for a bit, showing its potential.

So what happens at a school dance?

Looking very mature in a black and pink floral dress with spaghetti straps, Meredith was talking like a typical teenager about her hair, her shoes and whether she should wear sparkly silver tights to the homecoming dance. 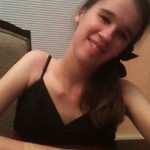 Before we left the house, she began to ask a million questions about the dance, some I couldn’t even answer.

“Will my friends be there?”

“Will there be music?”

“Are they gonna have pizza?”

I am reminded Meredith has intellectual disabilities every day, but on this night, her excitement screamed typical teenager.

The entire family loaded into our minivan heading for McCallum, but first we made a stop at H-E-B where my husband, Jim, purchased her a corsage and then put it on her wrist. Excited but suspicious, she immediately referred to it as this “flowery thing growing on my arm.”

Jim dropped Meredith and me off at the front of the school. Many of the freshmen had the same curb service, but no one had a parent tagging along. Gasp! I knew her teacher would be at the dance, but I had decided I would go and help chaperone.

We walked in the school building and the cafeteria was just to our right. Meredith’s smile was nervous, but she seemed excited as she went to see what was inside. I was relieved to see students were kicking and batting balloons around, reliving the glory of their elementary school days.

After 20 or so minutes, the dance music started throbbing and all the kids molded into a nondescript mass of teenagers jumping up and down to the rhythm and pumping their fists or open hands skyward. There were very few kids with obvious dates here and a scant number of corsages. Things have changed so much with high school dances and, thank God, really.

Meredith spotted some kids from her special education class and the four or five of them stayed in exactly the same area all night long as if they were behind an invisible barrier.

I laughed as I watched Meredith do her signature twirl and her friends smiled at her finesse. I had hoped kids from outside of special education who recognized her in all the chaos her would stop by, but it never materialized. I still hold onto that part of her life, but, as she gets older, I see her enjoying her time with other kids with intellectual disabilities just as much. Still I wondered if Meredith wanted to be with the kids who were dancing in the big group or friends she might have remembered from middle school. I couldn’t tell if it made her sad. 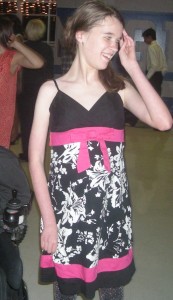 But at the end of the night, one thing was clear: Meredith didn’t see herself as separated from the majority, she saw herself as joined with the few, a solidarity no doubt felt by many students that night, from the Fine Arts Academy to the football players to the kids who think physics is fun. There are many cliques for many reasons, but Meredith’s formed because the students in it all arrived at McCallum with disabilities. It’s to Meredith’s credit that she has never thought that unfair.

I won’t go to the homecoming dance next year because Meredith can clearly take care of herself. That ascent up the bus steps every morning is just the beginning of her more independent road. I’ve kept her at base camp for as long as I can, but maybe it’s time to let her go on without me.

This story was published recently in The Austin American Statesman. Please contact Sarah if you would like to reprint this article. Thank you.