Loaded with enough advice to amp my anxiety, I’ve decided to go on a sojourn to New York for three days on my own. I’ve got dozens of restaurant recommendations, bucket list considerations and I’m terrible at reading maps.

Okay, so I know Times Square is a beacon for tourists, but, it’s my first night and it’s too early for dinner, so I’m walking purposefully toward the lights.

I get there and most everyone under 25 in Manhattan is here and most are  just milling around like they’ve forgotten the New Year’s Eve ball already dropped. It’s bright, it’s unforgiving and it’s one more dancing M&M than I’ll need to see again.

Tomorrow I’m moving on to a view of a different sort, the Empire State Building. I am so psyched because I’ve always wanted to go to the top though you have  to want that really bad in February.

It’s 36 degrees when I climb out of the cab, but I am not deterred.

Where is everyone?  Assuming there’s a long line around the corner, I tell a security guy I’ve got an express pass, which means I paid a little extra to get in a shorter line and get to the elevator sooner. And, man, was that a relief.

He points me to the special line and it’s completely empty as is the line for those with regular tickets. Devoid of any irony whatsoever, my special ticket was honored as if there were maybe 10,000 other people in line. “She’s got the express ticket!” he yelled to his buddy at the next check point.

Arriving at security approximately 10 seconds later, I chose the line on the left.

“No, you can go through this one,” he said, pointing to the right. “You’re express.”

Ok, again, both lines were empty. Both of them. By now the crowds are picking up with a couple and another family who foolishly have not  paid for the express pass.

Once we were all done with security, we follow different security people and ushers through a tag team tour of one of the lower, less glamorous  floors of the Empire State Building stopping along the way to see a history exhibit.  I had completely lost my express privileges by now with at least nine people somehow getting ahead of me.

We’re almost to the elevator when I find myself face to face with the cheesiest backdrop of a New York skyline I’ve ever seen. “No, thanks,” I said to a picture in front of the fake skyscrapers.

“It’s part of the tour,” I was told by one of the security officers in a tone suggesting there is a price to pay to get to the top.  I’m finally invited to board the elevator. There’s light banter and laughing on the way up and I am as excited as my daughters would be.

When we come to a rest at the 86th floor, the doors open and I shove everyone out of the way screaming “I HAVE AN EXPRESS PASS!”

I walk a few yards through the glass doors to the outside platform. You can be just as cynical as you want, but, I actually said “Wooooow.”

It’s a clear day and I’m floored at just how amazing the city looks from up here, especially the Chrysler building, which appears even more regal from above. I also learned that roofs, you know, aren’t that attractive on most buildings. The Statue of Liberty was, of course, tiny and were those ice skaters I could see moving at Rockefeller Center? God, I think I could. Stunning.

One of the surprising things to me was you really couldn’t look straight down even if you wanted to because of the metal fencing going all the way around the perimeter. This did absolutely nothing to slow the shutterbug convention all around me.

It’s hard to say where Cary Grant was standing when Deborah Kerr broke his heart, but I could sense many stories up here, tragic, beautiful, funny. And, now, I had one of my own.

When I come back in to the indoor part of the 86th floor I don’t recognize any discernable blood flow in my hands and that means my next stop needs to be something indoors. MoMA comes to mind immediately, but no express pass. Damn it. There, of course, is no line at MoMA.

I go to the paintings first because I’m still a sucker for the classics. I just didn’t realize how many were here. I’ve bumped  right into “Starry Night”.

I love Van Gogh, that beautiful, broken man. Every time I see this piece, the swirls look different, the brush strokes have a new level of intensity.       We’ll never really know the full back story on this painting, but here it lives so millions can wonder and buy tote bags bearing its image.

I studied the modern art installations for half the afternoon, not because they’re all so magnetic, but because I still have so many questions, especially on that room full of TVs.

Do you ever wonder what the person next to you is thinking?

I came to one room covered in pieces of nickel-sized candy wrapped in silver squares twisted at each end.

“You can take one,” the security guard said.

Is there anything MoMA can’t do? No, it invented the something for everyone category  from the pretentious to the let’s-stop-at-the-gift-shop-first tourist.

It’s been a day of arctic chills and engaging artistic expression so my perfect NY trifecta will end with jazz.

“There it is!” I yell at the cabbie, tapping my window. “Can you pull over here?”

I open the door to the door of the club and notes from a tenor sax tickle my ear luring me downstairs to catch the end of the Cookers’ 8 p.m. show. I’ll see them again at 10. The stage sits under a low ceiling and red neon letters spelling “Iridium” are a backdrop. It’s exactly how I imagined a jazz bar in New York to be only less smoky.

The hostess tells me I have to order a cocktail and spend $10 from the menu as part of my admission. Done. I sit down and exhale.

One of the sax players comes over and sits two chairs down from me to talk a very young fan. I discern immediately that jazz musicians still call each other “cat.”’ He tells one story after another and I’m trying to listen to him unobtrusively. For the last story before he takes the stage, he glances at me and says “Are you listening?”

“Yeah, I am ,” I said much to the annoyance of the junior cat.

He starts telling us about a bus full of tourists that pulled up to the Vanguard and one of the cats is taking the money from each tourist. After the last tourists pays, “that cat split,” leaving the  tourists with no entertainment. “He-heh- heh,” he laughed.

Then the band’s drummer walks by and the sax player said “Hey remember when that cat took all that money from the  tourists?“

As the Cookers began playing again,  I ordered another beer and let the notes wash over me. You don’t happen on to stories from the road like that very often and it made their their post-bop jazz even more entertaining. 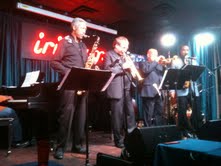 Seeing as how I once fancied myself an indie rock, punk light girl, jazz is something I finally get after tonight. I’m leaving the club infused with sweet jazz, Brooklyn Lager and no cab in sight.

Walk, walk, walk. Why did I have to wear heels? And then, just like that, I see Seventh Avenue, my hotel street. Oh,hell yes, I will not need a cab.

The Morning After: Greenwich Village

Holding the distinction of being the first café to serve cappuccino in the city, Caffe Reggio feels like this tiny bistro in Florence off a side street. It’s filled with Italian antiques and a 16th Century oil painting and I am completely transported, you know?

When my strawberries and whipped cream arrive, I am floored at how the whipped cream is as tall as my cup. In my New York City fantasy, they did this just for me.

Here I felt like I was discovering that other New York for the first time away from the tourist attractions. It’s hard to think anyone could get jaded living here. There’s no way to recreate my past six hours, including my chat with a artist in Washington Square Park, an amazing bookstore find and  Cafe Condesa, a little bistro I bumped into by accident. 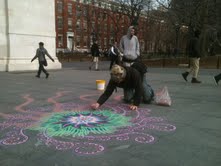 From my  perspective, New York City never became my New York City until I put away my lists and stopped googling. Random walking will get you everything but predictability.

It will get you a day you can only have once. I’m just enough of a romantic to believe that’s what I came here for.