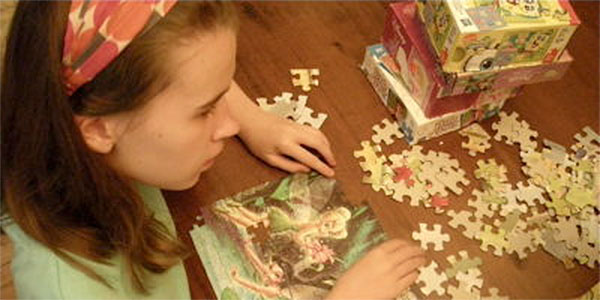 Posted at 10:16h in Statesman Columns by Sarah Barnes 0 Comments

Figure this one out.

My daughter collects puzzles, so when I found a missing piece on the floor, I asked her jokingly which puzzle it belonged to.

“It goes to Olivia,” she said without hesitation, referring to a puzzle with a pig on the front.

I found Olivia with about six other puzzles she hasn’t worked in months and held the missing piece up to the box. The piece was sky blue and had just one squiggle across the top, so there were few clues. After comparing it to the actual pieces, I got a match.

Out of thousands of pieces Meredith has seen in dozens of boxes, she narrowed this piece down to one box. 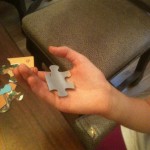 How weirdly amazing is that?

It would be impressive for a typical teenager, but for our daughter Meredith, it’s completely stunning because her brain is built a little differently.

According to her diagnosis, she is missing her corpus callosum, a band of millions of fibers connecting the two hemispheres of the brain. She also has a smaller cerebellum, which controls coordination and precision.

It’s hard to explain to her friends and teachers what she is capable of, but I do know she is so much more than the sum of her parts.

Some of her peers know this, but it takes patience to understand why she can be so talkative yet often cannot say her name when asked. She might refer to her sister as “blue shirt” all day because that’s what her sister is wearing. It’s taken years for her to be able to say the word “please” and yet she said “bon appétit” to the cat one day with no prompting.

This quirkiness was at the forefront of my mind recently as I entered the halls of McCallum High School for Meredith’s ninth-grade orientation. Are high school kids going to understand her? I tried to hang back from Meredith so it was not so obvious she was with her mother.

My plan failed almost instantly as Meredith really needed me to pull out her chair in the cafeteria because it was a tight space and moving the chair was awkward for her.

We sat across from a male student quietly working his Sudoku puzzle.

I saw a few of Meredith’s classmates, but they were all chatting, and the most useful thing I could do was take mental notes on their fashions so Meredith and I could shop correctly. Meredith will mainly see her regular education peers for lunch, an elective and when student mentors or friends come to her classroom where she takes special education classes tailored to her learning style.

I looked at Meredith and could tell she was full of anxiety, and so was I. Maybe I shouldn’t have brought her, I wondered. Maybe it wasn’t a good thing to be the girl with the mom. A welcomed break in my mental torture came with a question from the male student with the Sudoku puzzle.

“What are McCallum’s colors, Meredith?”

Yes! A student was engaging with my daughter. OK, I was so smart to bring her. Meredith didn’t answer — blue and gray — but the initiation of a conversation made my day.

He told us about being accepted to orchestra at the McCallum Fine Arts Academy. To see his enthusiasm and effusive description of a program he barely knew told me there was going to be a lot of passion here, and that was a good sign. I had so many questions for him, but the grown-ups in the room had other plans.

Meredith and I were given a list of questions to be used as “ice breakers” for the students to get to know one another. I knew Meredith would need cues to answer some of the questions, and one student, who will be a dancer at the academy, gave her extra time when he asked about her favorite superhero.

Our questions were cut short by the scavenger hunt, a romp across campus where we learned about teachers and room numbers and the building’s layout.

The scavenger hunt took us up and down hallways, around portables and over to the gym. We learned names of teachers and counselors and the location of in-school suspension. I could see Meredith was getting a little tired.

“No, I’m OK,” she answered assuredly.

“High school is going to be cool,” I said.

“Yeah,” she said as a smile spread across her face and she moved purposefully down the hall to join the other students.

The orientation must have felt like a giant puzzle with moving pieces to Meredith, but she has a place here. 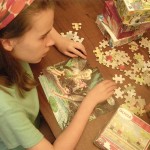