Posted at 13:17h in Updates by Sarah Barnes 0 Comments

HB 590 passed unanimously in the education committee of the Texas Legislature! It’s just the first hurdle, but hopefully this means all kids with vision impairments in Texas public schools will  have more access to a specialized service called  called Orientation & Mobility. It’s a therapy that helps students learn how to traverse various surfaces, read signs, use public transportation and more. Without Marjie, Meredith’s O&M specialist, we’d be getting nowhere literally. 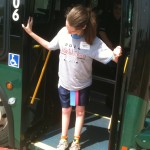 Meredith practices getting off the bus.

This is exciting for students with disabilities, but it it’s also a thrill for me to know I made a small contribution. Supporters behind the bill asked me to testify and, when I learned I’d be out of town,  I told them I would write something in support of the bill. Meredith has been receiving this therapy for ten years and the notion that other students were missing out rankled me.

Here’s what I said:

It wasn’t long ago when my daughter would look at the three steps to board a city bus and see Mt. Everest. It was like her brain had to deconstruct each step and remind her legs how to work and her eyes how to accommodate for her lack of depth perception. Today, after years of O&M therapy, she practically skips aboard the bus –  the stuff of dreams for a parent who wondered if she’d ever walk.

Meredith’s O&M specialist has taught her to walk on gravel, ride an escalator and cross a street. I can’t imagine Meredith’s life now without being identified early on as needing O&M.  Without it, we would have given up the bus, the playground and the mall because the challenges were too great.

O&M, however, is not just about conquering one’s community. It’s a therapy that is prepping my daughter for a future where she can follow a map, get on a bus by herself, work a job and take a moving sidewalk in the airport to a place she never dreamed she’d visit. This should not be a privilege, but an accessible right for all students.

And so it goes. I wish I could have been there because I would have delivered my words more passionately, but we are on our way now. Go team! 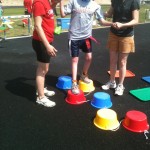 Meredith has fun using her balance at the O&M games.