Posted at 12:16h in Essays by Sarah Barnes 1 Comment 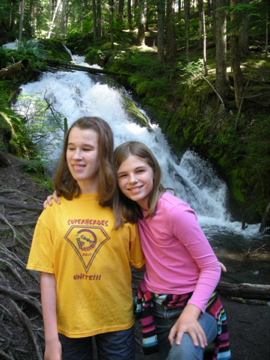 My daughter Meredith walks with an awkward gait, she only uses one eye at a time and she asks about ten questions per minute when she is uncertain what may be coming next.

So my family of four is in the mother of all public places – the airport security line in Austin. One by one people notice Meredith and her differences. “Let’s open it up for some questions,” I always want to say. Or… “You’re busted!”

Meredith is 14, but sometimes acts like a 5-year-old, really not so different from other teenagers, right?

I mean considering the airport is so full of sensory information and stress for all of us, it’s a wonder Meredith doesn’t explode. Things were going well until this sealed our fate: “Your daughter has been picked for the random search. You need to step aside with her.”

Holy mother of God. No. Not today.

She has SPECIAL needs, people. SPECIAL. I mean does she look like she might help a terrorist?
So, we begin the drill. This security guy had no idea what he was about to unleash. As he wiggled his fingers into blue, surgical gloves letting them snap on his wrists, he took out a card to take her fingerprints. Meredith, he would now learn, was not going down without a battery of questions.

“What are you doing?”

“Why?” she asks enjoying the fact that she has a man held captive by her socialization techniques.

“Will it hurt?” she says pulling her hand back.

“It’s OK,” I said. Then in a less comforting voice, I said, “Meredith it’s almost over, just put your finger on the card.” God, I have no patience.

When it’s all over, a smile spread across my face. I’d like to say that it was out of pride that Meredith did everything correctly, but it was really the absurdity of the whole thing. The truth is Meredith would never make it out of a terrorist planning meeting because she’s too inquisitive, making her smarter than most terrorists I presume.

We settle into our seats having survived Meredith’s antics. She spends most of the flight asking questions or giving a running commentary on a Max and Ruby movie.

I was never more relieved to start our vacation in Oregon. As I stepped into a hot tub in the Skamania Lodge in Stevenson, Washington all my anxieties began washing over me as I looked out the window at the mountains. I could have stayed there forever, but 20 minutes would have to do. We were getting up early the next morning to take a small hike to Zig Zag Falls and I’d need to conserve extra energy for Meredith.

We got out of the car and both my daughters were immediately charmed.

“Look, it’s beautiful, Mama,” my younger daughter Caroline said of the fallen trees, giant boulders and meandering stream, the trifecta of a successful kid hike. She ran ahead while Meredith held on to Jim’s arm tightly as the two traversed muddy patches, rocks and tree roots, a trifecta of a different sort. We were all determined she could do it.

Then a funny thing happened on the way to the falls.

We were almost there when we saw a group of teenagers ahead of us coming back from the falls. Several were in wheelchairs and many had behavior issues and motor delays. Meredith began staring and I kept trying to divert her. She was staring at kids with special needs. The irony was palpable.

It occurred to me that part of the reason people look at Meredith is to gather facts on what she can and cannot do. Oh my God, that’s it I realized. It’s not the people staring that bothers me, it’s their conclusion that gives me a heavy heart.

Most people look at Meredith and then look away. But those people that take Meredith aside, answer her questions and then take her fingerprints are separating her from the crowd in the most beautiful way possible.