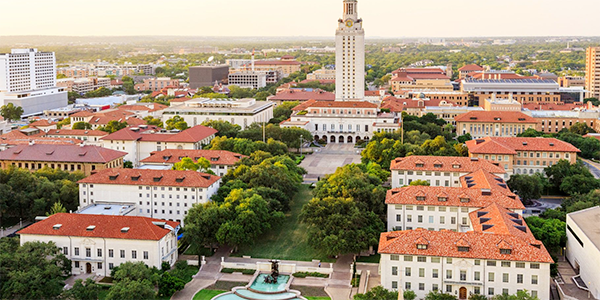 02 Nov One building, two pathways to joy of words

Posted at 13:50h in Statesman Columns by Sarah Barnes 0 Comments

As a journalism major at the University of Texas, I spent hours in the Jesse H. Jones Communication Center laboring in the newspaper lab over every paragraph, every lead and every word of a story.

Today in the same building, I spend two hours a week absorbing every sound, every gesture and every hope that my daughter Meredith, 3, will have that first word.

tiny mouth, a sound that may someday soon become a word and a gesture that may eventually give us a clue about how she learns.

I always thought I’d return to campus someday with my daughter. I’d show her The Daily Texan offices and the classroom where I wrote my first lead. I never thought I’d return with her because she needs therapy to learn how to talk.

Sometimes you don’t have to look hard to find irony in life. Every Monday and Wednesday, it greets me at the door.

While it’s wonderful to have such a phenomenal resource here, it’s worry that has brought me here. My daughter, who is developmentally delayed, speaks no real words yet except for “da-da,” which can mean anything from Daddy to a piece of toast, depending on what she is labeling at the moment.

Her concerned neurologist has said that things need to pick up with her speech in the next couple of years if she is going to talk. There is no magic pill or book or research to guide us in finding out exactly how Meredith will find her speech connections. Some weeks we see breakthroughs with new sounds. Other weeks, little progress. I can only wait and hope and keep having that same dream where she wakes up, looks at me and says “mama.”

Sometimes I feel panicked that I’m not doing enough. I bring this sort of panic with me each time I go to the UT lab. I put on the headphones and lean into the glass, which works as a two-way mirror, so I can hear and see Meredith’s speech lesson with a graduate student, but she can’t see me.

This is sort of like watching your child play softball inside a glass bubble. You mentally cheer her on because she doesn’t know you’re there.

In today’s lesson, Meredith is patting her chest — her sign language for “want” — and pointing to the Itsy Bitsy Spider game. The student begins singing the song, and Meredith beams. When she stops for Meredith to say a word in the song, my facial muscles tighten and my body gets rigid. I want to yell, “Come on Meredith. You can do it. You can say ‘spider.’ Keep your eyes on the therapist.”

Then Meredith gets a little gleam in her eye and suddenly says “TAH” with such force that any teacher would give her extra credit just for enthusiasm. It’s not “spider,” but that’s what she meant and it’s the most beautiful thing I’ve ever heard.

I sit back in my chair , relax my shoulders and do an invisible high-five. She will say spider one day, I’m convinced of it.

As we leave the building, we’re surrounded by students . Perhaps one of them is leaving the building for a J312 newspaper assignment just like I did.

I think back on my journalism classes where I was taught to write about failures and victory, good people and bad people, disasters and miracles. As a newspaper reporter, I told other people’s stories for a dozen years — some of them about people who dove into a challenge head first when life handed them a curveball. Maybe it’s not so ironic that I should return to a building where I first realized that, for many people, life doesn’t always go as planned. The difference is now I know there’s more to their stories than what I wrote in my notebook.