Posted at 08:46h in Essays by Sarah Barnes 1 Comment

The other night Meredith got out of bed around 2 a.m. and walked across the hall. She pushed open our door and reached in to find the light switch. As soon as she found it she flipped the overhead lights on.

“Heeeeey!” both Jim and I shouted together. Before we could make sense of it, Meredith turned them off and went to her sister’s door and did the same thing.

Meredith disappeared back into her bedroom. I wasn’t sure whether to laugh or be angry. Jim called out and by the time he got to her door, she had burst into tears.

“I just thought it was morning, ” she said with extra emphasis on the “morning.”

As Jim tried to sort out the incident with her, my heart broke because the most predictable thing in her world – night and day – had become confused.

It’s not entirely surprising and actually plays right into a recent discussion I had with her teacher. While Meredith has always been aware of changes of in a 24-hour period, she is now wanting to know ahead of time what is coming next and whether it is coming on time.  It has become more and more apparent that despite her funny, literal, empathetic self, her maturing brain wants rigid predicability.

I took her to the office store to get a folder for her sister recently and she picked out a calendar completely on her own.  I thought it was interesting because she can’t read or write and other adults do much of her daytime planning,  but she wants her schedule, her comfort, her notebook that tells her exactly what comes next. No surprises, that’s my daughter.

Last night I asked her about the lights again and she said she got scared because she thought it was morning and she couldn’t hear anyone in the house. She thought we had left her alone. She had to turn on the lights, she said, to make sure we were there. 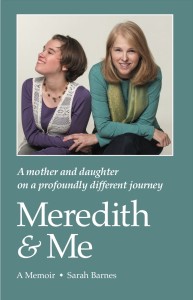 Sarah has written a book about her first 18 years years with Meredith. For more information on how to purchase the book, use the contact form on this website or email her at mydifferentroad@gmail.com