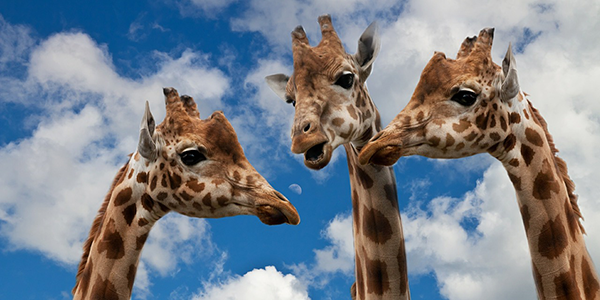 Posted at 11:52h in Statesman Columns by Sarah Barnes 0 Comments

As the giraffe placed her mouth firmly around the tree’s top branches and pulled off some more leaves, the children all clinging to the fence watched in excitement.

I could only imagine how mundane this all must have seemed to the giraffe at Waco’s Cameron Park Zoo.

“Mama, look at the giraffe!”

Surely they can do better than that, she must have thought as she paused to look at the tykes and then went back to her munching.

For Caroline, my two-year-old, it was her first time to the zoo and a thrill to see the animals that heretofore she had only known in books. Every one of them will remember Caroline as she screamed “Good bye” at every exhibit as if she had been invited to a play date.

But what made this family outing so special was reactions from my elder daughter, Meredith, six, who has developmental delays. She’s only been walking unassisted for about nine months and her vocabulary a year ago consisted of about four words. Now she knows more than 100. And the animals heard every one of those words… trust me.

My little chatter box, who I once thought might never utter a word or walk on her own, set out to make the zoo her own. As soon as we got out of the car, I grabbed her hand to head to the entrance.

“Are you excited about seeing the animals?” I ask her.

“Yey-ahhh” she answered, a uniquely Meredith twist on the usual “yeh,”  an exaggeration she saves for the most exciting occasions.

And this was one of them. She eagerly kept pace with us and even zoomed ahead of us along the pathway to the first exhibit. It was bizarre for my husband Jim and I to see Meredith getting away and having to say “Meredith…stop!” In fact, we never dreamed we’d have to say “Meredith..stop!” The words sounded so foreign.

But despite her enthusiasm, I was still guarded about the zoo experience. We had taken Meredith to the zoo a couple of years ago and because of her limited vision she couldn’t pick out the animals unless they were very large or colorful and moving. It was frustrating and disappointing to all of us.

But she’s come so far since then developmentally, including improved vision. Surely this trip would be different, I told myself.

Our first exhibit was the monkeys. There was a slight hill to get down to their home and Meredith decided she wanted to hold on to my hand. As we arrived they were swinging from a rope with their impossibly long arms dangling them about six feet from the ground.

We put Meredith as close as we could to make it easier for her to see. Fortunately these monkeys were being active so I was really hoping she’d be able to pick them out of the man-made jungle surrounding them.

“Meredith, do you see the monkeys?”

I waited for what seemed to be an eternity. I was thinking to myself  “Come on….come on….tell me you see the monkeys.”

She was utterly silent, but then her gaze got more intent. She cocked her head allowing her eyes to focus a little better and a smile came across her face. She said nothing.

I bent down and whispered in her ear,  “Do you see the monkeys?”

“Yey-ahhh” she responded. The smile never left her face.

“She sees them,” I called to Jim who was wrestling with Caroline trying to hold her up higher. We didn’t pause to have a conversation about it, but we both knew it was big.

And I suddenly felt like we were the poster family for the exhibit titled “A Typical Family at the Zoo.”

Of course, anyone who got close to us could see that Meredith walks a little jerky and unsteady and she talks in partial sentences. But to me her special needs this day were no different than any other child. Like other kids, she liked some animals better than others and she grew tired toward the end of our visit. Typical, not special.

Jim and I marveled at how smooth this outing was going. No strollers. Limited whining. Two children that can walk and talk. “Can you believe how easy this is?” I said.

“I know, I know,” Jim answered, relieved that the day had not turned into an ordeal as it had in the past when we had to take turns carrying Meredith.

We ended our tour with lunch at the zoo, a feast that gave Meredith yet another chance to use new words – “ketchup” and “hotdog.”

Sometimes there are perfect endings. And ours was long overdue.