Posted at 16:37h in Essays by Sarah Barnes 0 Comments

Free stuff is cool, though it often requires you to spend money. When you go to the spa, you get free perfumed soaps. When you go to a fine restaurant, sometimes you get a free appetizer. Once I got an extra olive in my martini when I had only ordered two. Free. Free. Free

But how about a donut?  Sure a donut can be free especially if you are at Krispy Kreme and the donuts are coming off the belt and the employee just hands you one.

But I knew that wasn’t the protocol when I went to Ken’s Donuts on the Drag near UT. I had not been there in a decade, but in talking about Ken’s with a friend recently, I thought I’d go. I needed an errand or something to kill time between dropping off the younger daughter, 11, at fashion camp and my older daughter, 15, at theater camp.

Meredith, the older sibling, and I  pulled in to the parking slot  and the familiar green letters on a white background greeted us from above. 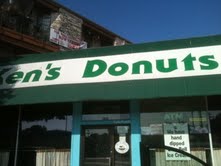 “What is there, Mama?” Meredith said when we walked in.

“Oh my, Mere. Well, there are the jelly filled ones here, powdered sugar, glazed, chocolate glazed. What looks good?”

At that point, the owner came out possibly wondering if I was  going to recite every donut available.  I pointed to a glazed donut for Meredith, which I planned to split with her. Who splits a donut?

We sat down and I took a bite of her donut savoring the sweetness of the glaze followed by airy dough. Then, I reluctantly handed it to Meredith.

Meredith smiled, but didn’t spend long on my memory, or the donut. Within minutes, she was ready for another one. The owner was standing at the register when Meredith pointed to the powdered sugar donut on the top shelf. He grabbed it with a piece of rectangular paper and handed it to her. When I reached in my wallet for some cash, he said “no, no” and motioned his eyes to Meredith. “No, no,” I said back to him. “You don’t need to do that.”

It’s not the first time Meredith has been offered something free presumably because she has disabilities. It’s a weird world in Special Needs Nation and sometimes people are moved to do things they never would in a typical day or forced to think in ways that make them uncomfortable. I travel this city every day and I find some of both, but when a baker wants to give my daughter a donut because walking and expressing herself are obvious challenges, then I’m all about accepting his kindness.

Meredith smiled. He smiled back.

Before we knew it, Meredith also had a bottle of milk, free.

I suppose some parents might worry about the message I’m sending to Meredith here, but I think the donut says I’ve spent 15 years fighting for Meredith and I’m real tired. If someone at Ken’s Donuts wants to give my daughter a free donut because he feels good contributing something to her life, than that’s awesome.