This past weekend, I witnessed a small miracle at our birthday slumber party: all three fifth grade girls were in bed before midnight.

This is an outrage. And where are the sleeping bags?

These girls opted for real beds. They’re different, far smarter than their 1970s counterparts. They’d rather spent their time writing a song call “Eye of the Kitty” adapted from “Eye of the Tiger.”

But my real surprise of this whole birthday sleepover extravaganza was how the girls treated Caroline’s big sister, Meredith, who has intellectual disabilities. She seamlessly fit into the group asking mostly relevant questions and grasping the point of each activity. She always does better  in critical thinking when she is with typical peers. Her interaction also meant I wouldn’t be feeling the familiar pain in my gut from kids who just ignored her.

And so I felt all the more guilty when I shipped Meredith off to my mom’s house for an overnight. Sometimes I forget that my decisions about Meredith are done to keep the family balance in check; Caroline needs to be able to have fun on her birthday without having to keep an eye on her big sister.

Besides the party was going to get amped the next day as the party girls and I decided to meet Meredith and my mom at Krispy Kreme donuts. Yeah, now who’s the hero?

I have to admit even I like to watch the donuts waddle through the vat of boiling grease and then get coated with more sugar than the Imperial factory itself and that’s just one donut. 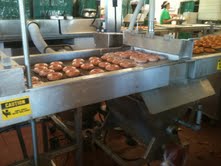 Right after we ordered, Meredith walked in the store smiling from ear to ear. The party guests didn’t cringe, but greeted her with enthusiasm. We all sat down for our fat feast and I marveled at how these girls could eat so many donuts and not start lapping the building with excess energy. But their curiosity was piqued by the donut belt and I could see they were asking exhaustive questions to the employee relating to physics, culinary arts and work ethic. I sat and visited with my mom.

Then the party actually got cranked one more revolution with this: “Can we give them a tour?” Lisa Miller, an employee asked.

Huh? Did I hear this donut associate ask the girls on a tour? Yes, I said emphatically. It’s at this point that I usually explain Meredith. This takes about 10 seconds and I usually tailor it to the situation. In this case I was going to mention she might need a reminder not to put her hands in hot grease, for example. Actually she would never do this as she practices extreme caution in a new environment.

So I let the tour go without any explanation about my daughter. For maybe the first time, I didn’t sabotage a spontaneous moment for my daughter.

But they finally emerged with their very own donuts – with sprinkles. It turned out the gloves were for the sprinkles. Lisa and her colleague made a huge fuss out of the whole thing by taking pictures and never once gave Meredith a second thought. This is the kind of inclusion I have literally fought for at my daughter’s school and elsewhere. There is no reason whatsoever why Meredith can’t hang out with typical peers. Frankly they have just as much to learn from her as she does from them.

In the words of Homer Simpson: “Donuts. Is there anything they can’t do?” 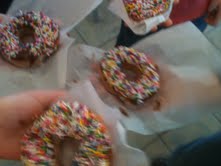