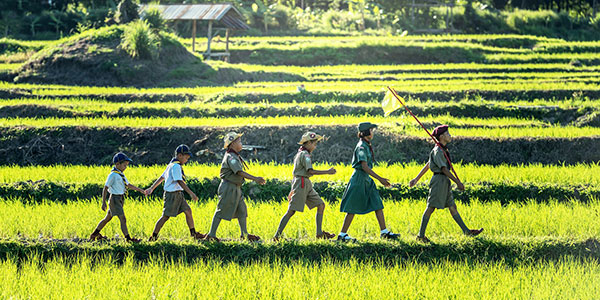 Posted at 07:54h in Statesman Columns by Sarah Barnes 0 Comments

CENTER POINT, TX  — As I wiped the sweat off the back of my neck, I wondered if my sun hat was welded to my head and if my family and I could make the next 20 yards through a dusty parking to get to camp registration.

The check-in process takes place outside and our spot in line is no where near the front, but the heat and patience is all worth it to come to this little enclave for kids with special needs. Called Children’s Association for Maximum Potential or  “Camp Camp” it’s one of the few places on the Guadalupe River that is designed for my daughter Meredith, who has intellectual disabilities.

Like typical kids at dozens of other camps along this river, Meredith will be able to participate in archery, horseback riding, canoeing and arts and crafts. The camp has three new pools this year all gated in one area. Meredith will love this. The pools are designed for campers with different abilities and that is something you will not find at the Holiday Inn, for example.  I wonder which one is made for Meredith? This is her third year at the camp and though we both know it pretty well by now, I always worry about her.

After we cleared the first checkpoint at registration, Jim and I and Meredith and her sister Caroline walked across a short path to the pavilion to wait for Meredith’s buddy to show up. These volunteers are usually teenagers and they  stay with your child all day long. Literally. Meredith needs some assistance in walking on gravel and knowing where things are in relationship to her cabin. She also needs someone to soothe her  anxiety with certain activities like horseback riding because the last time I checked a horse could not answer ten questions in one minute.

The buddy feature is the only way I could let Meredith go to such a big camp by herself and though I can’t pick the buddy myself, the camp seems to have a pretty good system.

Within minutes Meredith’s buddy shows up at the pavilion and introduces herself to Meredith. I tell Meredith she will be her buddy for the rest of the week and Meredith acts like this is the first time she has ever heard this. I feel a twinge of guilt, but I know Meredith will start to relax when we get to the cabin, which is approximately eight miles up a slight incline. Ok, almost.

Meredith and her buddy.

As we make the trek to the Apache Squaws cabin, I hang back to talk with my new best friend. I was getting to know Meredith’s buddy asking her  the typical questions of “Where are you from?” and “What else have you done this summer?”

Then the most mundane of questions just about killed me. “How old are you?” I asked.

Fifteen. It felt like a sledgehammer. Meredith is also fifteen.

It was startling to me that this sweet girl who would be assisting Meredith was born the same year. I don’t doubt her competence, but it brings up dreams I had years ago as a different, more naive mom that Meredith would somehow catch up to her peers. So here she is now with a peer and she’s obviously not caught up and never will be. That’s obvious to the outside world, but it still brings a flutter of pain to see what could have been.

By contrast, my heart really soars when I see that dozens of teenagers are willing to give up a week or two out of their summer to volunteer in abysmal  heat to be with kids with with special needs. Meredith will learn so much about being a typical teenager. She loves a sense of belonging with other kids whether they have disabilities or not. The Apaches will find a loyal camper in her.

We finally got to the cabin and saw the familiar Apache sign on the door. This meant one thing – air conditioning! We went through the door and then asked Meredith what bed she wanted. “That one,” she said as though she had been studying the room for weeks. She chose a bottom bunk with the counselor being on the top bunk. Everyone had bedspreads and stuffed animals from home and music was playing and, in general, the whole joint was zoned for teenagers.  The moment I entered I felt like saying “Oh, sorry. I will get out of your way asap.” 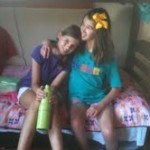 A final goodbye on Meredith’s bunk from her sister, Caroline.

We helped Meredith unpack a little bit and then it was time to let her just absorb what was happening. Meredith does a great job of making the departure easier on us. She simply distracts herself with another activity or tells us to leave, so I wasn’t surprised when she said: “I’m going to play with that ball over there” just seconds after we hugged. She almost always cries when we come to pick her up like she forgot to do this on the front end. I love her sense of self-preservation.

On the way back to Austin, Caroline and Jim and I stopped at the Hilltop Cafe just outside of Fredericksburg. There were very few people there and it was quiet. Meanwhile back at camp, we guessed Meredith was asking dozens of questions because that’s what she does.

We miss you already, Mere.