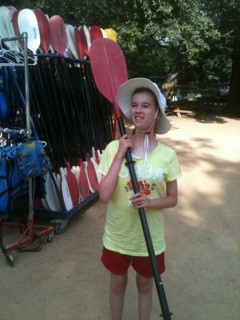 I dipped my oar in the murky, rippled waters of Lady Bird Lake and shoved off from the dock.

I had never kayaked, but apparently a license was not required and so with a thumbs up from the camp counselor, I was as ready as Sacagawea for my expedition. My daughter Meredith and her friend, both teenagers with some disabilities, sat in the middle and front of the three-person kayak.

The trail of kayaks looked lovely as our oars gently cut the water making a perfect backdrop for an Impressionist painting.  I easily kept up with the group in a rhythmic paddling, first one side and then the other. Just for practice I got crazy and turned left and then right and then dipped my oar in deeper to come to a stop.  This was so cool!

Five minutes later, I was wildly padding toward my party and getting no where. It was only a breeze, but it took me in exactly the wrong direction making my oars feel like bricks.

Meredith, who decided her oar was primarily decoration, was shifting a bit too much as well.

“Don’t rock! Don’t rock it!” I said hoping nearby kayak enthusiasts would not notice I was yelling at a daughter with special needs. Strangers usually don’t get that.

“What are you doing, Mama?”

“I’m trying to get back to them, the other kayakers,” I said.

When I got to the part where I went under the Mopac Expressway bridge, the breeze picked up and after overcorrecting, I just missed slamming into the bridge.

I was thrilled to find a summer camp for my daughter where she could interact with young adults on a similar social level, but it was a trip that would require a stunning amount of mental strength, you know, for me.

The counselors showed us the correct hand position on the oars and we began the laborious task of getting Meredith in the kayak. Given that Meredith had a steel rod in the back and uneven legs, it made more sense to let her figure it out.

I did convince her it might be best to sit down on the kayak and then put her legs over. She got in front of her assigned seat and did a deep knee bend, but she popped back up again. She did this about four times and when I finally got in the kayak, she bent her knees again and sat down. This represented about five years of physical therapy minimally.

There were five kayaks, each carrying a teenager with special needs and an adult or some sort of combination. For the entire day, I trailed the row of kayaks, but I was too busy pumping my arms to get upset about that. I found the lake much more vast and intimidating when not viewed from a car. Swans were a good diversion, except they were mean and the turtles only surfaced for a nanosecond.

Paddling was exhausting, but this was personal now and at $250 for the week, I was not quitting.  I had been told we were going to paddle to Barton Springs, about 30 minutes away. My paddling did not improve and as we made our turn around the bend, I was expecting to see the kayak party waiting. They were not.

“Do you see the guides, Meredith?” I asked, my anxiety amped. 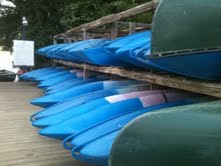 Indeed, there was a cheerful guide waiting for me just beyond a tree.

“Thanks for waiting, ” I said with copious amounts of gratitude.

“No problem,” she said. “The springs are up ahead.”

I learned when anyone on the lake said “up ahead” it meant at least 15 minutes in Sarah paddling time.

Once we cruised into the cove with the springs, the water became bubbly and beautifully cold. I stuck my hand in and exhaled like a Tonkawa after a day of hunting.

Then I saw it, right ahead. Sweet Jesus, it was dry land. It was actually a piece of cement, a sort of dock for people to sit on if they did not want to swim. But how to get there? What stood between me and this island was a pack of 300 dogs, all with wet, slobbery tennis balls dangling from their mouths. Looking down into the water, all I could see were thousands of fist sized rocks and giant boulders covered in slippery moss.

The counselor suggested we get out and pull the devil kayak over the rocks to the patch of cement.  I think she saw my fear because she came over and said maybe it would be best for Meredith and I and the other camper to stay in the kayak and be pulled in.

Oh my god. Was I really this big a wuss? No, I’d let them pull the girls in, but I’d get out and walk. The counselor instructed me on how to walk in the water keeping my feet on the smaller stones and using the bigger stones as gripping tools. I gingerly waded through the arctic water as children and dogs gleefully floated by. I finally got to the cement collapsing next to Meredith and her new camp friend, both sitting and splashing their feet in the water.

I realized it was one of the first times I truly understood how hard it must be to be my daughter. A simple walk across a playground must seem like slippery rocks to her especially if the surface is say gravel or wood chips. She has poor balance and no depth perception because of a vision impairment.  It’s  a wonder she gets out of bed each morning.

I was listening to Meredith and her new friend chatting about the water and dogs and I was thrilled Meredith was having a teenage  conversation.

But my moment of solace was interrupted when a dog, who was surrounded by water, decided he need my water bottle too. He shoved his long snout under my arm and grabbed the bottle just as I was going to take a drink. OH, hell no. I had another mile to get back to the dock in the kayak and I was not doing it without water. As I grabbed one end of the bottle hanging out of his mouth and pulled, I prayed it would not break. He finally dropped it. “No, no, no, no, no!” I said , eyebrows knitted, one arm on a hip, the meanest human stance I could come up with.

It seemed like we had just arrived when the counselors said it was time to head back. I got back in the water one more time dipping my hat in it and pouring it over my  head because it made me feel like an athlete. I backed  the three-person kayak into the water and immediately ran into a rock for which the expression rock and a hard place was invented, right here.

The guide saw this and began to come over.

I  got out of my kayak and into the water to push us away from the rock. Then just as the kayak started to float again,  I jumped back in. I am God.

Meredith’s friend was quite a good paddler, but like me, she  needed breaks. Meredith floated on her perch talking incessantly about what was around her. Did Cleopatra do this? Much to my surprise, she took her hand and put it in the water right over a bed of  weeds getting some tangled in her hand. “They need to fix this,” she said.

“I’ll tell the city to get right on that, Meredith.”

Meredith had grown incredibly comfortable gliding through lake water of unknown depth in a teetering kayak. I had been too busy fretting over paddling to notice. I was unbelievably proud of her.

After the kayaks were put away, we had “brag” time and everyone in the group gave Meredith big praise for getting adjustied to the kayak and the water.  One of the counselors also noted my perseverance.

I’d  fought salivating dogs, cities of seaweed, vicious rocks and 109-degree heat.  And, I’d do it again. For Meredith.