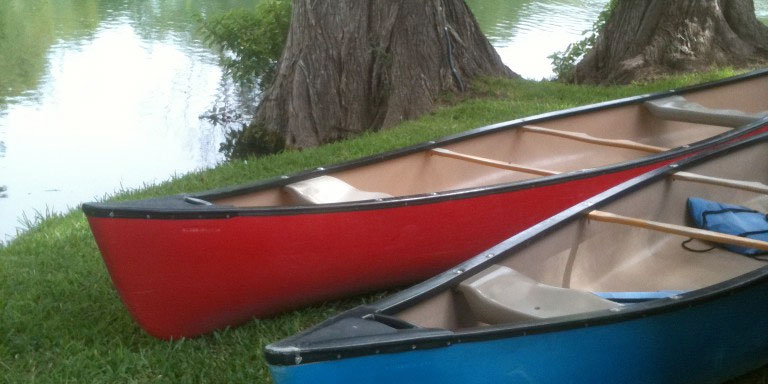 Note: The majority of my stories are about Meredith and her impact on the world. This story is about my other daughter Caroline and the bond we share over Camp Mystic. Sometimes I just want to write about the typical side of my life.

As my Honda Odyssey hugged the Guadalupe River along Highway 39, I was looking for the red and blue canoes on my left signifying I was close to Camp Mystic’s front gate.

A line of about twenty SUVs, vans and cars had formed at the gate and now we were all waiting to gain admission. I couldn’t wait to see Caroline, my daughter, who was here for her third year.

My mind was thick with nostalgia as I waited in line looking at the cypress trees hanging over the river as if they might fall right in. I had been a camper here in the Tonkawa tribe in the 70s and very little had changed. The line began to move and I could  see the girls in white dresses inside the gate directing drivers to their daughters’ cabins.

At Caroline’s request, I had decorated our family van in shoe polish with “True Tonk” written on the back window and “I heart Mystic” on the side window.  So, you know, the Tonk girls were thrilled.

“Do you know how to get to her cabin?” one of the girls asked me as I put my window down.

I wanted to say I’d known for more than 30 years, but that seemed to age me unnecessarily. I snaked around the grounds, past Senior Hill, over the river, past the office and finally to her current cabin, Look Inn.

Parking the car and opening my door, I wondered how long it would take me to find her. “Mama! Mama!”

“Caroline!” I yelled back.

Suddenly two weeks seemed like a very long time and as I hugged her I noticed she didn’t even feel the same. It was as if she had grown an inch and matured over night. I smoothed her hair and held her cheek against mine and we both got teary eyed. 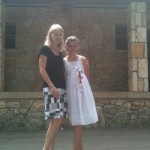 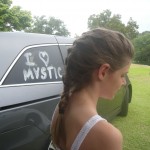 We went to her cabin and, one by one, I met her friends. It was like they had jumped out of the letters she had written home. I felt as if I had known them for years. The cabin was in various stages of upheaval with some trunks already gone and others with clothing and papers poking out from the sides. Others were thrown open as if the camper thought it was hopeless to even try and make it work. Parents were learning exactly where their girls slept and the pitfalls of being on the top bunk.

“See Mom?” Caroline said. “I put the stars here,” she said pointing  to the exposed coils of the top bunk that were basically Caroline’s ceiling from the bottom bunk. Instead of looking at ugly coils, she looked at the stars.

Looking at her purple trunk, I knew we could not put it off much longer.

“This is going to be so heavy,” I said pulling up on one of the handles  to test it.

We thought one of the counselors or a dad might come rescue us, but apparently we looked awfully capable. We got it down the cabin steps. “Ow, ow, wo,” Caroline yelled shaking her hand.

We did this mother-daughter dance until we finally heaved it into the back of the van. Finally, we could head out across the pristine grass to get to the dining hall and have brunch. It’s become much more elaborate than in my day. The fruit display could easily be in the Hyatt resort. 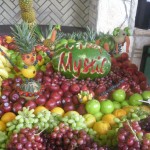 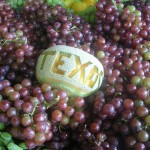 We got a muffin and breakfast taco and sat on a rock ledge overlooking the river and grounds.  Caroline looked healthy, tan and full of stories as we talked about the tribe, her cabin, mean girls and ice cream with peanut butter. 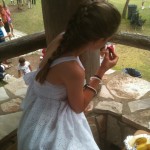 Once we were finished we went down to the water and I put my hand in and said once again the river was much colder when I was  at Mystic. The canoes looked completely unchanged making me wonder if they were the same ones I used to swamp all those years ago. 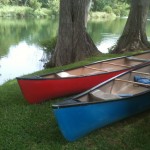 “Mama, I have to go with my friends!” Caroline said abruptly as all the girls began to gather on the far end of the river with their cabinmates. The official closing was almost underway.  If you need a mental image to describe this, it would be very similar to the opening ceremonies at the Summer Olympics. 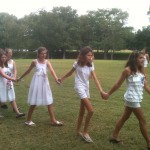 The girls held hands and sang and some of them waved to their parents before they sat down together as a group waiting for the “games” to begin. Not too much time passed before we heard the thunk, thunk, thunk of an oar beating against a canoe being paddled by the Kiowa and Tonk tribe chiefs. They got out of the canoes and faced one another. After a special handshake, they lit the flame. Sound familiar?

The awards ceremony began and it seemed like at least 600 awards were given out before it was over. We also listened to the girls who had taken riflery class recite the rules of gun safety for the parents. Only in Texas can you buy pink boxer shorts next to a round of ammunition in the camp commissary.

But the final part of the awards – by far the most important – was the announcement of which tribe won the games for the two weeks and this year it was the ……Tonks!  The screaming here was deafening, it really was. Still, this was the first time in Caroline’s three years the Tonks had won, so she was ecstatic. Thank god we were in the same tribe. 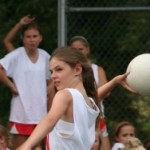 After this, the girls reported back to the dining hall for ice cream and one last goodbye. Parents were not allowed to tag along, but girl after girl emerged with wet eyes, so a camp tradition remains for another year.

I can’t imagine how different Caroline will look next year or what she will want to talk about, but I will remember her today with her white dress and a french braid and a Tonk win on the banks of the Guadalupe River. 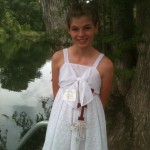