Posted at 08:05h in Essays by Sarah Barnes 1 Comment

When our family walks into a room, she is rarely noticed first.

She is the one with the pretty blue eyes, a boatload of poise and academically gifted. She is the taller sister, the deep thinker who came into this life already saddled with a different set of cards – a sister with intellectual and physical disabilites.

Meet Caroline, 11, the sibling without disabilities. She has been by Meredith’s side coaching her, praising her and laughing with her for as long as she could scamper across the floor.  Meredith, 15, still manages to lasso Caroline’s attention daily,  but it can be extraordinarily draining to answer dozens of Meredith’s questions in a 30-minute stretch.

While other siblings are riding bikes together or listening to music, Caroline may voluntarily spend an hour watching Meredith labor over writing an ‘M’ on a piece of paper. Meredith almost never moves on to the next letter, but Caroline still comes running to me excitedly with the news. These are good days worth journaling about. On bad days, Caroline is reminded  that her big sister will never grow up. It’s a formidable balance. 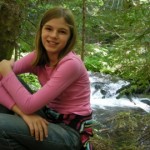 Watching the two grow up together is as poignant as it is joyful, but I’m realizing Caroline is rapidly moving to a time where she will strongly prefer being with  friends or alone with a book instead of being with her sister.

I wanted to give Caroline some time to relax without her sister so we decided to go to Port Aransas as a family, but it would be  a mother-daughter weekend for me and Caroline and Dad would spend special time with Meredith.

I had not realized this would mean boogie boarding, but game on.  Caroline gave me lessons on when to catch the wave and where to catch the wave. It was a lesson in patience and strength and I was amused at how well she could coach.

“W00 hoo!” we both yelled riding the wave till it sputtered and fanned out, steamrolling every sandcastle in its wake.

We boogie boarded until the sand burns on my knees were glowing and I decided to take a break.  Reluctantly, Caroline said goodbye and gave me a hug.  I collapsed in my beach chair never happier.

We got up early the next day because that’s what you do when you fish. We rented  a rod and reel and bought a tub of shrimp.

“Frozen?” I said incredulously as I pulled off the bait  lid.  “I’m going to have to chisel it out.” 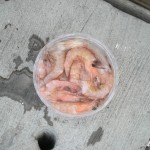 Their black bobble eyes stared at me in a most disturbing way as I took a pen to the ice ball and tried to pick at it till something pried loose.  We ran it under a faucet at a fish cleaning station on the pier and a few of them – eyes and all – came loose. It had been a while since I baited a hook so, squeamishly, I picked up a shrimp threading it on the hook just like my grandfather had showed me decades earlier. 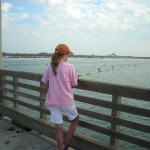 “Drop it in,” I told Caroline showing her how to release the line and pull it out until the hook reached a desirable depth. You could almost hear it plop as it hit the water, but the pier stretched out into the gulf, so most everything was muted by the sound of the breakers.

“It looks totally different,” I said to Caroline. “From up here.”

We talked about everything but fishing. By the end of the hour, Caroline was baiting the hook herself and I had never seen her so capable, or self-reliant and maybe that was because I  hadn’t been looking.

Spending three days with my younger daughter was seeing how she views the world without her sister around. Like all kids going into the middle school magnet for liberal arts and science, she has lots of questions about the curriculum and social aspects and no real answers yet. I  never went through this middle school thing with Meredith, so every question from Caroline feels epic.

After fishing, we went back on the beach and my husband Jim and I settled into our beach chairs. Then came a tug on my sleeve and I looked up to see Jim pointing at the girls in front of us in the surf. Meredith, as usual, was leaning into Caroline taking advantage of her as a human crutch to make up for her unreliable balance. Caroline was pointing at something of interest on the endless horizon.
Caroline will one day walk into a room and be noticed first. Any day now.