19 Sep A little girl and her gift from the sea

Posted at 08:38h in Statesman Columns by Sarah Barnes 0 Comments 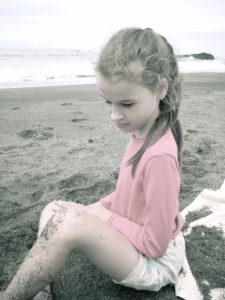 Don’t you hate it when you take your children to a place you loved as a child and they just totally don’t get it? Like you go to the zoo just to show them the polar bears and they are more fascinated with the popcorn. You take them for a pony ride and they hide behind a tree.

Let’s face it, it’s horribly disappointing and you can’t believe it’s your flesh and blood not loving every minute of it.

Knowing full well the emotional risks therein, I decided it was time to introduce South Padre Island to my daughter, Meredith, who is 3. Visits to the Gulf have created some of my happiest memories. For nearly four decades now, I have made this trek to take in the ocean, hunt for shells and deep-sea fish. Spending the day being sick over the side of a chartered boat in the choppy waters of the Gulf was a virtual rite of passage in my family.

So it was with great anticipation recently that my husband and I took our daughter to South Texas. I never know how Meredith will react to new experiences. She is developmentally delayed and cannot talk, so it’s hard to prepare her for something as vast as the ocean because she can’t ask any questions.

Right away I could tell she desperately wanted more information as her finger began pointing. She looked at the seagulls and pointed, and I said “seagull” followed by “beach” and “shell” and “bucket.” Each time she pointed at something, I would label it; soon we had the entire beachfront covered. Her little hand never gets tired of being her sole source of information gathering.

I watched her smile as the sea air hit her face and I did my best to explain the importance of the beach in my life. It was where I learned to swim out to the second sandbar. This meant bigger waves, better sand dollars and the coolness factor of hanging out with my big brothers. The Gulf was a sacred place where my grandfather spent many an hour explaining the finer points of hooking a kingfish. And later, it was a place that beckoned me to many a college spring break to flirt with boys and watch the sunsets disappear behind mountains of beer bottles.

Knowing Meredith was not old enough to understand the complexities of these memories, I had to settle for a sensory experience. I picked her up and sat her down closer to the tide and plunged her hands into the sand. We settled in for our first big wave. I braced her a bit as the white froth hit her ankles and crept around her back. A huge smile came over her face.

Before long, she was gesturing in sign language for “more.” Every time the waves receded, she would sign “more.” And, without fail, the waves would come back again. It was like magic to her that the waves never gave up on her command. In silence I watched as a new tradition took hold between the sea and my daughter.

I’ve always known the sea had a language of its own, one that has inspired writers and soothed souls. For a moment in time, it spoke to my little girl.

Today marks the first of Sarah Barnes’ columns about her experiences as a mother raising a daughter with disabilities. A Different Road will appear occasionally in Life & Arts. You may contact her at adifferentroad@aol.com