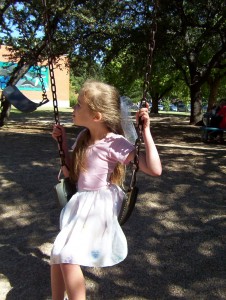 Our daughter Meredith was diagnosed with Agenesis of the Corpus Callosum when she was seven months old.

What is Agenesis of the Corpus Callosum?

How does it happen?

The disruption in corpus callosum growth occurs between the 5th and 16th week of pregnancy and can be the result of many things including a prenatal virus, fetal alcohol syndrome, blockage from a cyst or genetic abnormalities.It does not get any worse once the baby is born.

What is the purpose of the corpus callosum?

Each hemisphere of the brain has a specialized role in controlling movement and complex reasoning  in the opposite half of the body.  In order to coordinate movement or think about complex information, the hemispheres must communicate with each other, something controlled by the corpus callosum.

What are some of the behavior characteristics?

Every individual is different in terms of his or her ability to think and feel and perform motor tasks. Studies have shown there are some similarities including delays in developmental milestones and problems with complex reasoning and appropriate social interaction.

Source: National Organization for Disorders of the Corpus Callosum

Gary and Kathy Schilmoeller who spent years researching ACC at the University of Maine after their son was diagnosed,  pioneered the first listserv and support network for ACC. The ACC listserv provides a discussion group for subscribers to ask questions and post concerns about children and adults with ACC.  The service is free. Here are the steps for subscribing.

1. Address a message to <listserv@lists.maine.edu>

4. Send the message. You will receive further instruction.

Caltech Corpus Callosum Program – Dr. Lynn K. Paul, a neuropsychologist at Caltech, studies children and adults with ACC measuring emotional responsiveness and social cognition. To find out more about the research or whether you might be a participant in it, go to emotion.caltech.edu

NODCC (National Organization for Disorders of the Corpus Callosum – This organization has the largest network and support services in the country in addition to a national convention, research and a website with personal stories from families. nodcc.org

A mother’s story – so far

(This story ran in the most recent issue of the Texas Parent to Parent newsletter.  Find out more about this organization and their upcoming conference and workshops at txp2p.org

I spent my first year of the diagnosis searching for answers and schlepping Meredith to therapy appointments, doctor’s appointments and play groups with typical babies and mothers who had no idea what to say to me. Meredith was my first baby as well, so I was doubly clueless.

One time I was at the grocery store with Meredith long before she could walk and an older women noticed I was carrying her. “You are spoiling her,” she said. “She can walk.”

And of course my thought bubble said: Did you really just give me unsolicited advice on one of the hardest goals of my daughter’s life while deciding between the Honeycrisp and Golden Delicious?

What a weird planet we live on, parents like us.

Comments like that really ruined my day, but I had plenty of positive karma from support groups and the therapists from Early Childhood Intervention, the statewide program to help families get therapy and other services for their child with disabilities.

I’ve been lucky that the vast majority of teachers and therapists in Meredith’s life have been caring, helpful and driven.

Meredith has an unusual diagnosis called agenesis of the corpus callosum meaning the fibers of her brain creating a bridge between the two hemispheres did not form and she has a small cerebellum also due to a Dandy Walker variant.

I found a few people to talk to early on who had the same diagnosis for their child, but it’s really hard to see into the future until you’ve walked it.

Everyone warned me about middle school, however, and, man, they were  right.

It has been an epic struggle to find the social support let alone the best curriculum for Meredith in middle school.

I’m not sure where the disconnect was between Meredith’s hugely inclusive experience in elementary school and her sudden relocation to an island with few friends and very little chance of excursions. She seemed to just disappear.

I guess I turned into the mother from hell when I began writing about all this in the Austin American-Statesman, but I felt the need to open it up.

I suppose the biggest lesson I learned is Meredith’s education is only as good as the scheduling, which is deeply dependent on how many aides are in the classroom.

I recently help start a vegetable garden to be shared by kids in regular education and Meredith’s classroom. It has been successful and is providing an option to laundering team uniforms and don’t get me started on that.

Though I still make strong recommendations almost every week for what I’d like to see in the classroom, there are other areas my heart is now seeing differently.

Meredith has irretrievable quirks and physical limitations. She will never walk typically or write her name by herself or understand social skills, but she will say “bon appetite” when she feeds the cat. Do I really need to keep trying to change her, to make her walk better, see better?

Her physical therapist recently let her go because she said Meredith had hit a plateau. I’m learning to appreciate Meredith for what she has become. It’s far more compassionate than hauling her in for another therapy appointment.

I love her for the unique teenager she is. Sometimes when I’m annoyed with her behavior, I just think about being in her shoes.

I imagine myself with one leg being shorter,  one eye being shut down, the need to ask an unreasonable number of questions and extreme, inexplicable anxiety over getting in the car to go somewhere.