Posted at 09:42h in Updates by Sarah Barnes 0 Comments

I still get butterflies when I walk into my study and see the Barbara Jordan Media Award medallion, a short stack of books, clippings from the Austin American-Statesman and invitations to book clubs across Austin, Tx.

My eye always goes back to the books and the title “Meredith & Me: A mother and daughter on a profoundly different journey.” After spending 2016 with no foot room under my desk, I now just have a handful of books ready to be bought. I have sold through Amazon, Kindle, book groups, retirement communities, Texas Book Festival and to teachers across Texas.

Wow! It’s been a thrilling and crazy road for this first-time author and I would not change anything except maybe doing more talks.  I feel like every time I sell a book or give a talk, someone understands my road with my daughter Meredith a little bit more, whether it’s a special education teacher or a neighbor who has seen my daughter hundreds of times and never realized her complicated backstory. Thanks to all of you who listened. How did I get so lucky?

I give much credit to my hometown newspaper,  the Austin American-Statesman, for giving me the initial publicity and the space to write about my daughter for 16 years. I never dreamed it would last that long.

In celebrating my good fortune of the past year, I am rerunning the story about my book that created the launch of a lifetime. Thank you to all my amazing colleagues and readers. 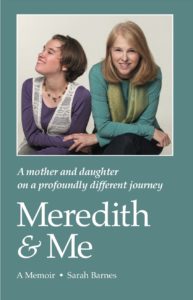 Sarah Barnes started writing her American-Statesman column, “A Different Road,” about her life raising daughter Meredith, who was born with part of her brain missing, 15 years ago. Meredith was 3 at the time, and she wrote about taking Meredith to the beach. It’s the same scene that opens her new book, “Meredith & Me.”

Through Barnes’ column, readers have watched Meredith grow up, take her first steps, say her first words, and enter elementary school, then middle school and now high school. The book expands on the column and digs deep into the joys and heartaches Barnes has experienced in the 18 years of raising Meredith, who is now a senior in high school.

Barnes lets you into the journey she and her husband, Jim Hemphill, have taken with Meredith from the first time the doctor thinks something might be wrong with baby Meredith’s eyes to that moment when Meredith was 7 months old, when a pediatric neurologist delivered the diagnosis over the phone. You picture her trying to find paper to try to write down what the doctor is saying. She finds some receipts and soon realizes she can’t read her own notes, let alone process that Meredith has an incomplete cerebellum and is missing most of the corpus callosum, the bands of fibers that connect the two hemispheres of the brain. You see her sit on the floor holding Meredith and whispering to her, “What are we gonna do, Meredith? What are we gonna do?”

It is devastating news. Soon Barnes decides she must quit her job at the Statesman to stay at home and manage the slew of therapy and doctors’ appointments that would become their lives.

She writes about the isolation she feels as she tries to find play groups for Meredith. In a sea of what she calls “Gerber babies,” Meredith stands out for what she’s not doing — crawling, picking up and eating Cheerios, seeing well the world around her — and that is painful.

Barnes also fields uncomfortable questions and statements, like the one that came from a friend of her mother’s who told her that Meredith would be fine because her brain would grow back.

The first year, Barnes searched for answers and wondered if she might have done something wrong in the pregnancy.

Now she never thinks about that any more. “There’s no sense in going there,” she says. “That’s what I tell younger moms. ‘Don’t Google this to death. There’s no purpose. You’re better off spending time with your baby.’”

Barnes begins to focus on what Meredith can do.

“You graduate when you stop trying to fix them all the time,” Barnes says. “Where Meredith and I are going, it’s going to be a little more fun frankly.”

The triumphs like her first word and when she started walking are appreciated a thousand times more, but then there are always the reminders of Meredith’s differences. One of the hardest times was middle school, when suddenly Meredith is separated from her typical classmates. That’s when Barnes begins to fully understand that Meredith will not catch up, that there will be things she cannot do.

But there are many things that Meredith can do that other kids might not do as well. She has a photographic memory and can tell you where you put your keys or which puzzle a piece belongs to. She is also incredibly empathetic and makes friends easily.

“She really is the essence of unconditional love,” Barnes says. “She makes friends really easily both in special ed and general ed.”

Having a typical child as their second child further highlighted the differences, especially when Caroline was a baby.

One thing Barnes did not want the book to be is a pity party. “It can’t be like that,” she says. “That’s not something our family ever looked for.”

She knows that the book won’t spare another parent the pain of a difficult diagnosis, like the one Meredith was given; but if she had read a book like this, it would have impressed upon her the importance of finding other moms to talk with. It also might have prepared her for the way her life was about to change, even something as simple as the amount of equipment that comes with a diagnosis like Meredith’s.

The book, she says, “represents some of the best and worst moments of my life.”

“The universal theme of this book is the coping, the fortitude and the hope,” she says. “That’s what you learn when you get this devastating phone call.”